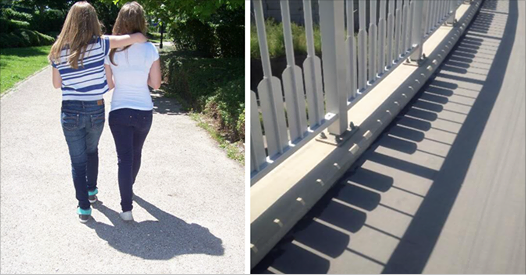 Shadows are unique to everyone and everything. Dependent on the angle of the light, the shadow cast on the ground can look completely different to the object itself and can even resemble a different object entirely. Quite often tricks of the light can make us do a double take, but these shadows, in particular, have made us take a second look. From a sidewalk piano to a hidden lion and a miniature rock band, these 12 incredible shadows are one of a kind.

#1 The shadow of these two girls looks pretty similar to that of a wildlife animal!

This is proof that females are a lot more feisty than once thought, there’s a wild animal hiding within all of us!

It’s almost like this pen is paying tribute to its creator by casting this interesting shadow.

#3 “The top of my gas tank casts the shadow of Batman at the right angle.”

This is not the hero that this gas tank needs.

#4 These two guys may look like strangers but their shadow begs to differ.

This shadow showcases a heartwrenching love story between two forbidden lovers, but in reality, it’s just a trick of the light. Maybe I’ve been watching a few too many rom-com’s.

#5 And the shadows cast on the side of this building have generated a pretty cool optical illusion.

If you look at this from a distance it really plays with your mind. It looks like the windows are coming out from the walls, but then you realize it’s just the shadows from the window ledges.

#6 The shadow of these two palm trees has created a beautiful lion face.

Palm trees are pretty stunning in their own right, but what they have created on this wall is really beautiful. It’s a shame the shadow won’t last forever!

#7 “So apparently my toothbrushes shadow pays attention to its oral hygiene as well.”

This is definitely one of my favorite shadows- tt’s almost like the toothbrush is encouraging you to brush your teeth!

#8 The shadow created by this leaf looks very similar to a dragon.

This leaf looks pretty innocent just lying there on the ground but its shadow portrays a much more sinister story.

#9 This shadow is definitive proof that unicorns do in fact exist.

For years we’ve been trying to prove these magical creatures exist, who knew they were just giraffe alter-egos the whole time!

#10 The way this cargo’s ship shadow has been cast on the sea looks like a city skyline, and it’s pretty awesome.

#11 “My friend’s dog has the creepiest shadow ever.”

I’ve heard about humans turning into werewolves at the sight of a full moon, but something tells me that this dog is a definite contender to turn into a mythical monster if its shadow is anything to go by.

#12 This shadow cast by the fence, has created a sidewalk piano.

Anyone fancy a little song along? I’m not too sure which key is which but it looks pretty cool regardless.