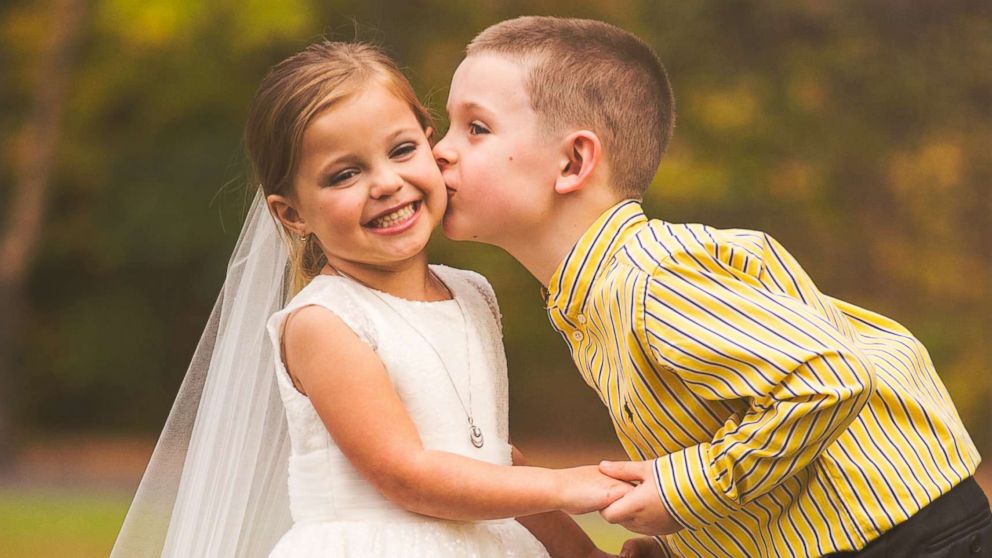 Sophia Chiappalone was born with several heart defects. She is just five years old and has already undergone three open-heart surgeries. This little girl had a dream of getting married to her preschool sweetheart, 6-year-old Hunter Laferriere before she undergoes the fourth open heart surgery in January at Boston Children’s Hospital. Sophia’s mom, Kristy Somerset-Chiappalone, asked her daughter, “What do you want to do? Do you want to go to an indoor water park? Or would you like to go on a shopping spree and get some toys?” and what Sophia asked in response is just magnetic. She said she wants to be a princess and get married to Hunter. She wanted a wedding.
Images via Imgur

They were laughing, tickling, and swinging on the slides.
It can be seen from their smile, how much fun little Sophia and Hunter had.

No doubt, Sophia felt like a princess and radiated the whole time, but Kristy had mixed emotions.
She says, “I was trying so hard to be strong and happy for Sophia, but I could not stop thinking about my daughter slipping into heart failure. Perhaps, it was the last time I could see my daughter in a wedding dress.”

Obviously, being a mother, she has some wishes for her daughter, and no mother can see her little daughter fighting for life every day.

When Kristy went to Hunter’s mom Tracy Laferriere and told her about it, Tracy and her son quickly agreed to do anything for this little Sophia’s happiness.
Sophia has spent her major lifespan in Hartford Hospital’s intensive care unit. Sophia’s best friend immediately agreed to be her groom.  Tracy began crying and added, “Sophia always agrees to play Mario with my son, so I think he’ll happily marry her. They have a magnetic chemistry, and it’s adorable to watch.”

The photoshoot was done by Tracy’s best friend and photographer, Marsia Balleti – Lavoie from Sassy Mouth Photography.
Marsia offered to provide a mock wedding photo shoot. Not only that, but she also arranged a veil and a little wedding dress from Bliss Bridal in Chester, Connecticut.

And this was a fairytale come true. What do you think? Aren’t they pretty?