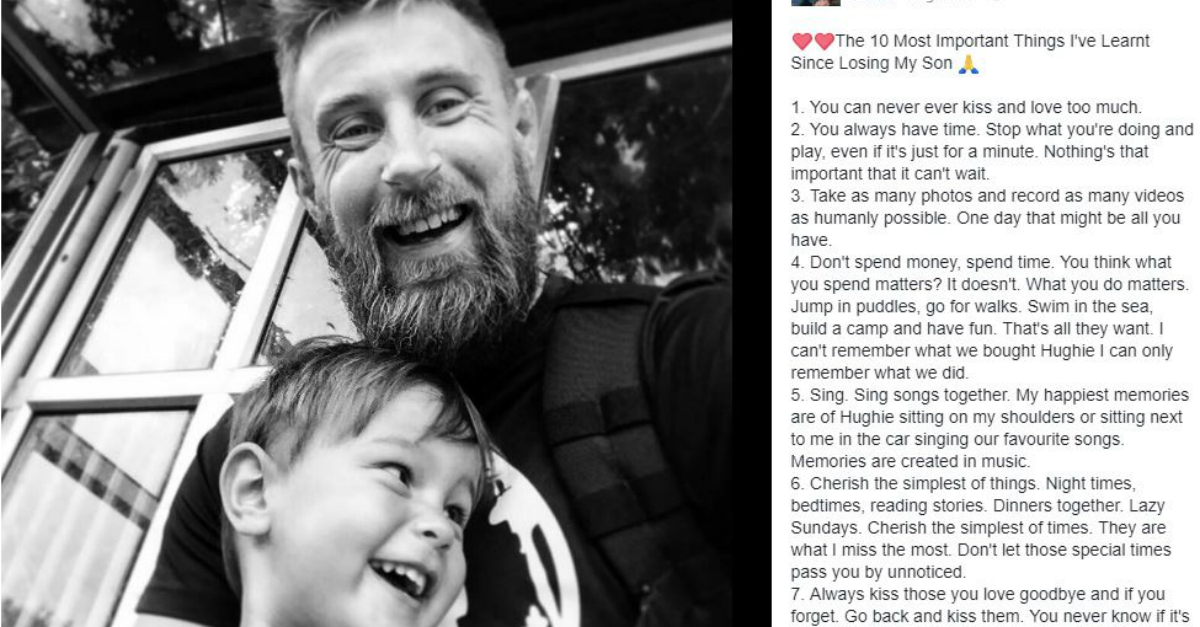 Losing a child is difficult. It is a setback that most of us cannot fathom. Losing a child is every parent’s worst nightmare and is a loss that never fades away. We spend so much time in our daily affairs that we miss to notice how kids grow, learn or even sometimes how we miss appreciating their presence around. This does not go for a parent child relationship but also with every other relationship we have in our lives.
Richard Pringle, a dad from East Sussex, lost his three-year-old son a year ago. It was unimaginable, and in the whiff of it, he decided to pen down a couple of things that the loss taught him. He wrote a series of lessons that he learnt in the furrow of his three-year-old son’s death and they are things that we can all take back home.
But before I begin the letter for you, keep Kleenex handy.

This is Richard Pringle with his three-year-old son, Hughie.

Hughie was diagnosed with a rare brain condition at a very young age.

Although the situation was concerning, doctors said that it was manageable.

However, when he was just three years old, that is in the summer of 2016, he suffered a major brain haemorrhage. He did not survive.

A year later when Richard was helping his daughter sleep, tucking her into the blanket, inspiration struck him.

He decided to write down a list of the most ten important things that he realised after losing his son.

The result was a real tearjerker.

The post was liked 21k times (still counting) and it seemed to have struck an emotional chord with parents all around the world.
[nextpage]

Pringle said, “You can never kiss and love too much.”

“You always have time. Stop what you’re doing and play, even if it’s just for a minute. Nothing’s that important that it can’t wait,” he added.

Cherish the simplest of times. They are what I miss the most. Don’t let those special moments pass you by unnoticed.

The post hit hearts of millions and tons of parents showered their comments mentioning how important moments are.

It is very easy to get caught in a life and all the stressful tantrums that one’s life gives but we need to step back some days and appreciate the simple little joys of having dear people around.

We never know when they might be taken away from us.

Richard’s words are truly the ones to live by.

He received love from all over the world, but there was one special that he posted on his timeline. It was from Japan.

Richard shared the message, and it is pretty moving.

If you have children with you, kiss them goodnight, have breakfast with them, walk them to school, take them to the university, watch them get married. And remember that you are blessed.