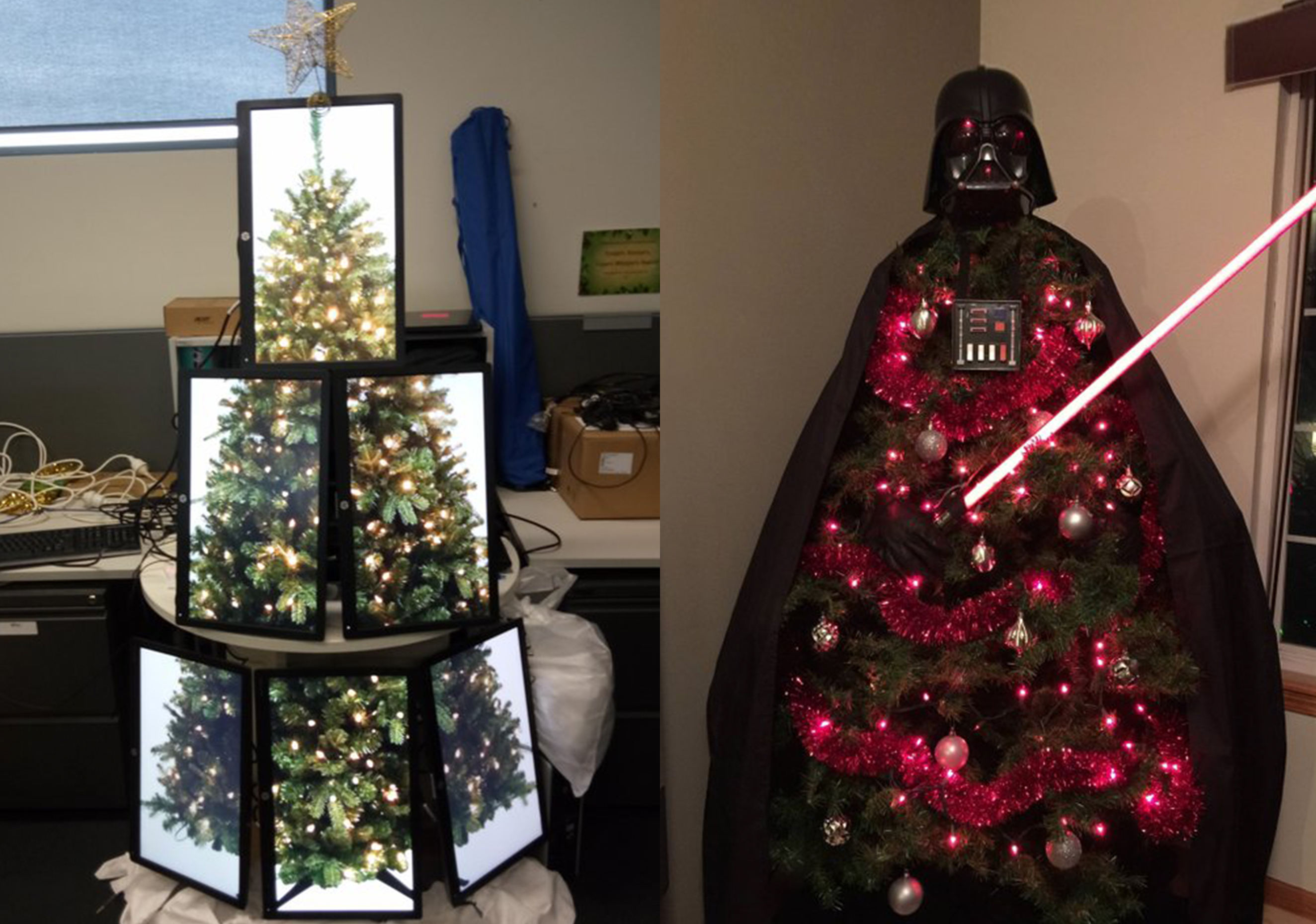 Not everyone likes celebrating Christmas with the same traditional-looking tree every year. Some of us either have way too much imagination (and time on our hands) or we’re just too broke or lazy create our own. But here are some folks who got totally creative with their Christmas tree ideas.

Reddit user EarthwormEd has a new Christmas tree in his lab, and it’s made of flasks full of harmless (we hope) chemicals. Just to be on the safe side, let’s hope no one bumps into the darn thing, or Christmas will be a total blast… literally!

Someone in Reddit user GOstrovskiy’s office must really love the game “Portal,” or maybe they’re just fans of any old Sci-fi dimensional portal. Looks like it took a lot of work to get the top half of that tree on the ceiling, so great job!

Reddit user u/catlvr34249 used yellow police tape as tinsel and handcuffs and badges, and we personally don’t think they’re crossing the line with this, but if the tree tries anything shady, it’s going to go straight into a cell.

Reddit user SquibbVicious will be celebrating a black Christmas this year with the ornaments based on the characters from “The Nightmare Before Christmas.”  Better yet, it looks even cooler when the lights go out.

The holidays can really wipe you out, especially when you’re in the middle of nowhere trying to maintain the peace. Fortunately, Reddit user u/jerm1820 found a couple of tires and a few other items lying around the base camp, and created a unique looking tree.

Instagram’s tabb_oule decided to entice shoppers to make healthier choices this holiday season. So, in lieu of a regular Christmas tree, they made one entirely out of veggies like tomatoes, cauliflower, broccoli and more. Well, it does look pretty but we’re still going to pig out on Christmas. Sorry!

Reddit user u/thatpartyguy decided to go digital for Christmas. So, using a series of flat screen monitors, he created the perfect IT tree, and the best part is that he didn’t even have to spend money on ornaments.

Reddit user splitheaddawg went all Vader with his Christmas tree idea so he could have a Merry Sith-mas. And everyone in the house felt the force of the holiday spirit flowing through them. Hopefully, they had their gifts wrapped in black wrapping paper.

Reddit user LadyMario created a Christmas tree in a lab made with bacterial cultures. It was probably cute until it accidentally fell to the ground and broke, which wound up releasing what will know be known as the Christmas plague.

This Tree Is Booked

Reddit user Botatitsbest took a snap of this Christmas tree at a public library. And hey! Why not? Books are made of paper, which came from a tree. So, it’s almost like this tree made a journey full circle… at least until Christmas is over.