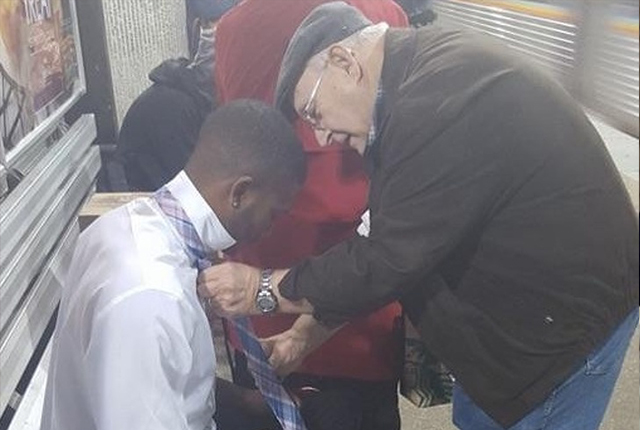 With the way things are going, it’s easy to assume the worst out of people. We’re constantly bombarded with negative stories that leave us shaking our heads in disbelief. But these little acts of kindness prove that real-life superheroes walk among us; we just need to look closer.

Reddit user Gangbangkang posted a photo of this woman who helped keep a crying baby boy calm. She even allowed him to sleep in her arms during the whole flight and then walked him to the baggage claim area when the plane landed. But he wasn’t even her baby. She was just kind and empathetic towards the little boy who was too nervous to fall asleep.

A Postman Left Some Snacks For This Dog

There’s nothing like an adorable animal story to warm up our hearts. A Reddit user posted a picture of their dog who was eagerly waiting for someone to open the door. His furry companion was desperate to go outside and grab the snack the postman had left for him along with his owner’s mail. Clearly, food is the way to a dog’s heart!

Reddit user Silverushi walked out and got quite a surprise. She thought she was going to have to sit on a wet bike seat because it had been raining. But some kind stranger decided to wrap her seat up with a plastic bag. How awesome is that?

Tied Up In Kindness

An unknown Reddit user posted this photo of a young man who was struggling to put on his tie while waiting for a train. So, this man gave him a hand and tied it for him. This random act of kindness allowed the young man to get ready for wherever it was he needed to go.

Reddit user TheUnseeingMonk led a cigarette clean up at his college. But why are there so many smokers on campus? Are they all that anxious about finals? Kudos to this guy for keeping the streets, sidewalks, and lawn of his college cigarette butt free.

Reddit user elle-noelle didn’t need a hat to keep her head warm during the winter, but if she needed one, she would always have this option. Someone left this hat taped in the city for anyone who might need it to keep their head from freezing.

Machine With A Heart

According to Reddit user asills, the T-800 may be a machine who can’t feel, but Arnold Schwarzenegger is da man! He actually volunteered his time to service the Cal Fire employees’ breakfast during the camp fire incident in California.

Hummingbird On The Web

Reddit user Dogs-Keep-Me-Going posted this photo showing how their dad saved this adorable bird after it got caught in a bunch of spider web. It had flown into the web and crash landed. If he hadn’t cleared the web off, the hummingbird would have never flown or sung again.

Reddit user my_son_is_a_box noticed something odd outside of the local Denny’s restaurant. Turns out that there was a cat that hung outside a lot, probably because it smelled the nice food. So, the restaurant gave the kitty a house and a bed outside of its storefront.