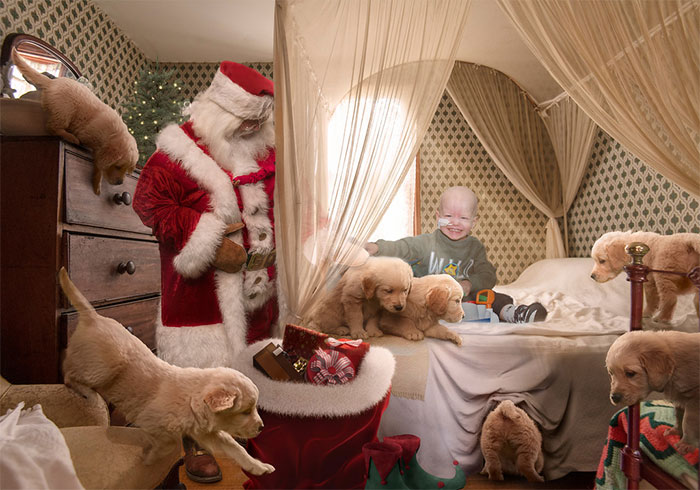 Spreading some love during the holidays, especially to sick kids in hospitals, should be everyone’s goal. It’s why The Heart Project started offering magical Christmas shoots to children in need, many of whom might not see another Christmas.

Project With A Heart

Since 2016, the Heart Project organization has been on a mission to bring a ton of smiles through a series of holiday-themed photoshoots for kids who are sick, with some of them being terminally ill, at various hospitals throughout the world. To say they’ve been spreading positivity and love is an understatement.

The project started at one hospital in Melbourne, Australia, and volunteers were eager to take photos of children in front of a green screen and then photoshopping them along with Santa, into some truly magical backgrounds.

At first, the project was limited to the city of Melbourne Australia, but the project grew to include other hospitals and hospices throughout all of Australia as well. They’ve even provided this magical service to kids in New Zealand, Canada, and the UK.

The project’s co-founders Karen Alsop and Adam Cubito came up with the idea to transport hospital kids into a fantasy world, particularly those kids whose families couldn’t make it home in time for Christmas.

The initial photo may not look like much, but once the background is added, it becomes an incredible work of digitalized art. Kids instantly go wild when they see the final image. Many of them can’t believe how magical it really looks. It makes them grin from ear to ear, which truly makes the project worth it. But no matter how beautiful it is to see the joy in their little faces, it does take an emotional toll on the crew.

It’s an extremely emotional project for many team members of the Heart Project, particularly because for some kids, this photoshoot is really the last photo they’ll take before they pass away. This undoubtedly makes the moment bittersweet.

Santa always brings out the happiness in children, which is why the project travels with their Melbourne Santa. But whenever he can’t make it to a shoot, other Santas from other parts of the world will step in to visit the kids and help put a smile on their precious faces.

According to Karen, the project has managed to visit over 200 children in 2018 alone. That’s a lot of kids with warm smiles, and happy hearts thanks to this incredible project that provides a positive lasting memory to these tiny patients.

Nothing can change what these kids are going through, except maybe a little hope. But for a fleeting moment, the project helps these kids escape their sad reality with the power of a camera and some serious Photoshop work. The photos are full of emotions and joy.

No kid wants a holiday shoot to take place in a hospital, but this project gives them the option to have a more magical background, especially for those who can’t leave the facility. You can take a look at their posted images here to see how this project made so many sick children smile with joy and in the process restore our hope in humanity.