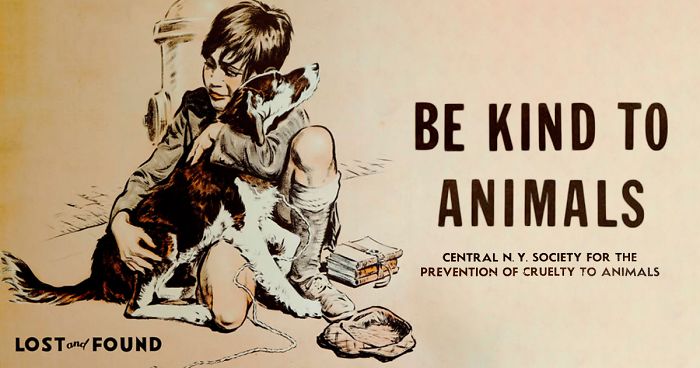 Support for animal rights isn’t a new concept. Back in the 1930s, during The Great Depression, the American Humane Association promoted a “Be Kind To Animals” week with posters that illustrated people looking after animals, and they’re truly eye-opening! Not only were they light years away from where we currently stand today, but these messages were ridiculously woke.

Ahead Of Their Time

It’s unbelievable how they managed to pull this off with all the poverty and uncertainty of that era. We can only hope that beautiful campaigns like this one will resurface in today’s modern world, too. After all, animals surely deserve to live happy lives, free from exploitation, mistreatment, and suffering.

Artist Morgan Dennis drew pets but he mostly focused on dogs. His illustrations portrayed adorable pups being taken care of by children. His work spread the message that people needed to respect all animals. It’s important to remember that good care includes not just bonding time and taking your dog for a walk every once in a while. Any responsible owner makes sure their pets get plenty of water, food, and shelter. But love is also something every animal deserves.

In those days, people came and went, but animals were often left behind. Not much has changed over the decades. There are countless pets that are being abandoned at shelters simply because their previous owners couldn’t afford to keep them or their puppy became a hassle. So, this poster speaks volumes about why we should never dump animals on the side of the road or move without bringing our pets with us.

Animals are like children, so you want to keep an eye on them. Otherwise, they’ll wind up in the hands of dog catchers, which in the 30s was pretty common. Animals require positive training so they won’t wander off and end up euthanized at a dog pound.

This poster of a pooch standing in front of a radio mic was calling all humans to be kinder to animals. Whether you own a cat, a dog, a pet tortoise or even a fish, your pet will always be there to comfort you. They’ll always want to play and will never let you down. So, why not return the favor? But most importantly, they’re living beings who feel happiness, pain, and sadness just like all of us.

Just because animals may look a bit different from us, doesn’t mean they don’t have the same needs. This illustration shows how it’s our job to make sure that animals are fed. They can’t communicate with words to let you know that they’re hungry, which is why keeping your pets on a feeding schedule is crucial. We’re sure the horse in this poster appreciated the apple that kid is feeding him.

If it’s alive, it’s a living creature, and just like you an I, it deserves kindness. As a reward, you end up having some of the greatest four-legged friends man could ever want. Animals will walk with you, play with you, and sit with you on the front porch when you’re feeling lonely. And if you’re having a great day, they’ll be there to support you and celebrate with you!

Don’t Take Your Eyes Off Them

Pets get excited and wander off, which can be dangerous. So, it’s important to keep an eye on them when you’re taking them for a walk. You certainly don’t want them running off into oncoming traffic. But if you’re driving, it’s also important to watch out for pets on the road. Remember that caring for animals is a life-long project.