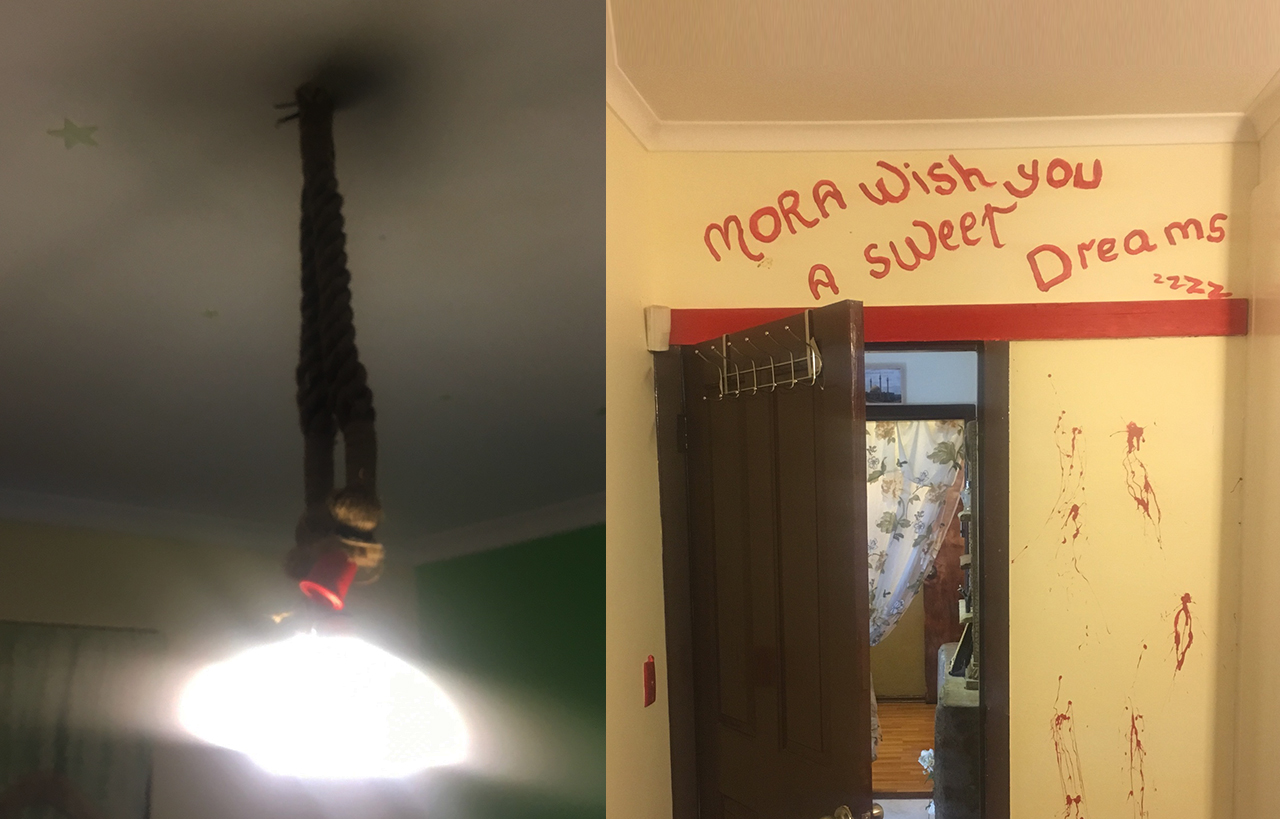 For Craig and Lisa Spurr, the purchase of their new home should have been a joyous time. But when they found strange things inside their recently-purchased house, they started to wonder if their humble abode was actually haunted.

Shortly after Craig and Lisa Spurr moved in, they started inspecting their brand new property. That’s when they discovered a few strange things that really gave them the heebie jeebies. They defied explanation, too, which terrified them a bit. They couldn’t help but wonder if the previous owner was into some heavy stuff.

One of the first things they noticed were a series of creepy messages painted over the furniture and on the walls. There also seemed to be a bunch of blood splatter, but they were hoping it was only a practical joke, and not the real thing.

It looks like the previous owners had a thing for someone called Mora. The name was inscribed on the wood and painted in red on the wall. According to Slavic mythology, Mara (not Mora) is an ancient spirit who sits on your chest and causes nightmares.

Another strange item the Spurrs found in their home was a hangman’s noose tied to one of the light fixtures. That in itself was creepy enough, but shockingly, it wasn’t the weirdest thing the couple found in their newly purchased home.

Window Into The Unknown

There was one room with heavy curtains. But when the couple pulled them away, they saw what looked like a fake window with a surprisingly peaceful water scene. Why didn’t the other occupants simply build a real window? They couldn’t help but wonder just what the heck was going on. Were they getting pranked by the former owners?

Let There Be Light

Most light fixtures only have so many bulbs when it’s a chandelier, but this four-bulb monstrosity on the side of the wall just looks plain weird. Whoever installed this must have been trying to repel some creature who’s afraid of the light.

The couple started posting the photos of all the bizarre things they found inside the house and shared it with people on Imgur. Soon enough, everyone had an opinion, but the general consensus was that the house was freaking haunted.

It’s clear that either someone was playing a prank on them, or it’s just one of those weird things no one will ever understand. We suppose they could chill in the backyard, but even the fan coiled around the pole looks a little bit funky. Maybe the former owners just wanted to scare the bejeesus out of the new owners, right?