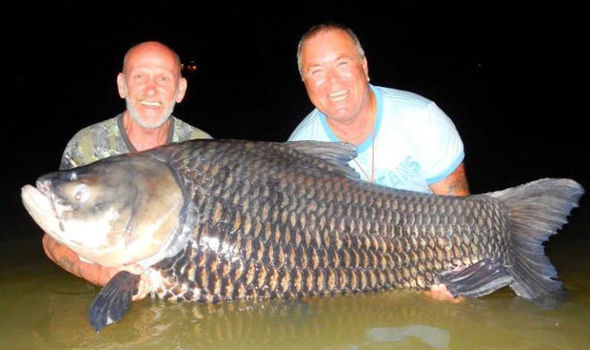 Two anglers managed to catch a beast carp using their dead friend as fish food or bait. Paul Fairbrass and Cliff Dale, both 65 were supposed to go on a trip with their best friend, Ron Hopper. Unfortunately, Ron Hopper tragically died of cancer.
So, both the anglers decided the best way to honor their best friend was to turn his ashes into bait for a dubious catch. Keen fisherman Mr Ron Hopper, 64, from Hull, East Yorkshire, was given just weeks to live after being diagnosed with an aggressive liver cancer in December.
The trio, all from Hull, East Yorkshire went fishing in Thailand last year as a retirement holiday and booked a return ticket this April. But sadly Ron lost his life right in the middle of the retirement trip. He lost his life on December 22. According to both his best friends, Ron wanted the seabed to be his deathbed.
If you like reading such articles, you may also give this a read: North Carolina Mom of Four Who Died After Complaining of Severe Migraine ‘Was Superwoman,’ Says Daughter

This picture was taken right before Ron became fish food.

According to his friends, on his deathbed, Ron said that he wanted them to use his ashes as fish bait.

He willingly said that if he could not go to Thailand for the retirement trip then his two friends should take his ashes to the Far East, infuse them with the special bait mix to make bollies and use them as baits.

While his widow Judith scattered half of his ashes on a beach far off in Grenada, the two best friends were given responsibility for the other half of the ashes.

The two fisherman named the bait mix “Purple Ronnie” and casted off with it throughout the trip.
[nextpage]

Mr Fairbrass, one of the friends said: “A few days before he died he asked us to take his ashes to Thailand and scatter them around the lake.

He added, “I told him we would go one better than that and turn him into bollies and catch a big fish with them. He just cracked up and said it was a brilliant idea.”

The unusual bait was so powerful that it helped them catch a whopping 18 lb Siamese carp.

Siamese carp is one of the biggest carp fish that has ever been caught in the world.
Fairbrass said, “We were gutted that Ron couldn’t come on the trip because he was really looking forward to it, but he was definitely with us when we caught that fish and we could feel him laugh.”
He added, “We caught some smaller fishes with it too but did not think we would get a big one. Ron must have been looking out for us and we caught the biggest one. It was right what he wanted.”
The three men are now part of Thai fishing legend. Now, isn’t that incredible?